Cabiria (1914) augment the European cinema’s stylistic paradigm grounded on the uniqueness of the shot which cost a lot of cash in the editing. However, by using the exceptional solution of the tracking shot and by still remaining within the traditional borders of the single shot, the film turned out into something very ground breaking. Within this film, we can detect the safe experimental innovations founded in Itala’s previous films such as the panning shots of The Fall of Troy, the narrative symmetries of Come una sorellaand also the visionary special effects of Tigris (Alovisio & Bertellini, 2000). 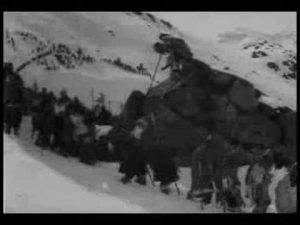 This film has a large impact from its many cinematic innovations such as its highbrow literary aspirations, the historical accuracy of its decorative sets, the astonishing popularity of its unpredicted hero, and its innovative tracking shots. Pastrone can tell that he had to invest a lot for this film starting from the set and costume design to shooting and editing, used four cameras to shoot over twenty thousand meters of film, filmed on location in Rome, Sicily, and Tunisia. Not to mention its extravagant set design and innovative moving camera, Cabiria’s additional technical innovations are strategic use of artificial lighting, ornate costume design, and a complexity in plot which was formerly unseen in Italian cinema. Pastrone enticed a well-known Catalάn film director / cinematographer / special effects man named Segundo de Chomόn whom achieved an exceptional range of special effects and creative use of color in several scenes such as the eruption of Mount Etna, Sophonisba’s nightmare, Hannibal crossing the Alps, and the human sacrifice at the Temple of Moloch (Reich, 2013). 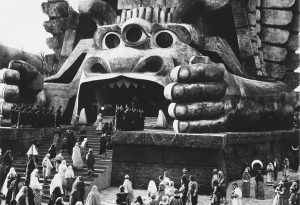 I think that the film is very thrilling and full of excitement at that moment because Giovanni Pastrone created something new and fresh for the public eyes. A more complex story with longer narrative, unique special effects and the possibility of moving camera also presenting a mount eruption, conflicting armies, mistaken identities, surveillance, passion, and human sacrifice at the temple of Moloch. It is also very adventurous with full of live action and many stunts man performing.

The film is interesting because it showed how the situation was at that time of period in which was set during the second Punic War. Views like the Alps, the dessert, the temples, the surroundings showed how it was like in the past. This is one of the contexts of a realist cinema, underwriting to a real effect in recreating the past. It had the camera penetrated diagonally into the action from a long shot to something a little closer. This has influence America in one way or another in making short films into having a longer story. It was during World War I period in which Hollywood was going to dominate the global filming industry and one of its greatest tutors was Cabiria.