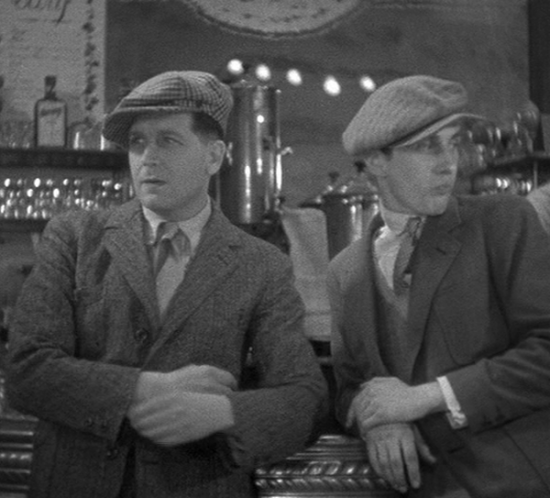 One of the classic French films known in the history of world cinema is the 1930 film of René Clair entitled Sous les tois de Paris (Under the Roofs of Paris), a story set at the marginalized lower-class district of Paris.  Under the Roofs of Paris highlighted the backdrop of the emerging influence of Poetic Realism. This film movement impacted the way French cinemas’ themes, settings, and characterization were presented and constructed that it usually showed the lives of the people on the margins of society, either struggling members of the working class or as criminals being involved in the urban disputes. Personally, coming from a social science background, I saw the peculiarity of Poetic Realism in the film’s imagery and production of the so-called “French urban melodrama” at that time in France. I observed that in the film most specially in its primary theme and setting how it tried to paint a picture of the everyday life in the marginalized district of Paris. Noticeably, the characters in the film resemble the mundane flow of everyday realities of the lower-class people. The practice of singing in the streets, the modest interaction of the people in the area, and the typical love story of this man bombarded by various hindrances and conflicts represent the daily melodramatic flow of the mundane life, the so-called ordinary life under the roofs of Paris. The attack of the story, and the set-up of the characters and the film’s setting are basically an approach related to the rise of Poetic Realism at that time. 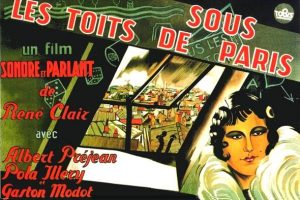 Under the Roofs of Paris, an important film of 1930’s that introduced the effective use of sound in cinema. 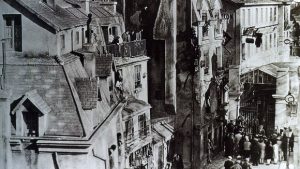 It also presented a peculiar picture of Paris, confronted by its everyday realities.

I also noticed the effective construction of the peculiar character of the film’s setting by displaying the usual images that can be seen in a marginalized community, the architecture of the urban life through the shots that displays the chimney of the houses. The honesty and realistic depiction of Paris in that film represented new images of Paris, as an area with rich interaction of people living and working but also an area conflicted by negative and harsh realities.  Thus, the film aside from telling the story of the romantic relations between Pola and the three other guy also tried to display the dark side of that area, which of that time is conflicted with crimes and with some instances of street violence. 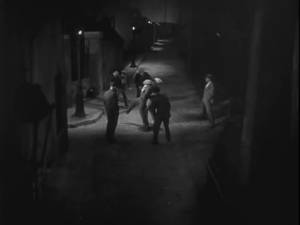 The city is also a place for crime and violence. A fight scene in the streets of Paris in the movie.

More importantly, I became particularly interested in the impact of Poetic Realism to influence the film’s characters most specially for Pola, the Romanian lady, was represented in the film as the fantasy of the male characters. It is very evident that in one way or another as the film progresses and as more male characters were related to Pola, it created an impression that Pola started to became “sexualized” and “commodified” as a “trophy” to be won by the male characters. It felt like the male characters were competing to win a prize, and in that case the prize is winning Pola’s heart. It can be clearly observed when Fred started to engage Albert into a fight to settle who’s rightful to be with Pola. This somehow depicts how these characters displayed the “machismo” notion of competition between men to win a girl’s heart as a social trophy of masculinity and power. For me, this is an attempt to highlight the display of the politics of women objectification that can be seen during the earlier part when Albert and Louis played a dice game to know who shall talk to Pola and during the last sequence when they are finally settling who’s going to have the final chance of “winning” Pola’s heart. Aside from its social commentary, I personally think the film presented a very weak and objectified characterization of Pola’s image as a passive character in the film depicted as a “social trophy” — confronted between the power and powerlessness of beauty. 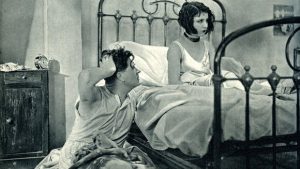 One of the scenes in the movie where Pola stayed in the place of Albert. 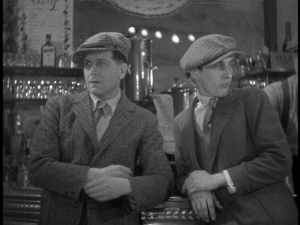 The movie featured the rivalry between the two friends, Albert and Louis, to win Pola’s heart. 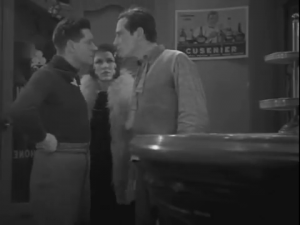 One of the crucial scenes in the film wherein there is a display of machismo and Pola was treated as a “social trophy.”

The film Cabiria relates to this notion of identity and racial representation which can be seen on the peculiarity on the way the film has presented its characterization. More particularly, I find it interesting how the film represented the characters of the slaves. I observed that it is a problematic attempt most specially when it touches sensitive discourse on identity and racial representation. It could be a mirror of how the film, through its story telling and artistic depiction of the existing reality, introduces critical issues on how characterization of the slaves in Cabiria is translating to a larger discourse on misrepresented identities. I felt a little uncomfortable in the way Maciste and his identity as a slave was built on an interesting and critical demonstration of biopolitics and racial typology at that time. His character represented as a slave, a political representation, is coupled with his skin color, translating as representation based on race and skin color. However, this initial depiction contradicted his overall impact as an interesting character due to his overall strength as elaborated by the spectacle of his muscular body built. This overturn is fueled by an important trend of nationalism and identity building thus resulting to a need to reformulate Maciste overall characterization -his “blackness” as an artistic display. As described by Reich, “Maciste takes pains to reinforce his whiteness through a complete collapse of the character-actor dichotomy and by constituting Maciste’s previous onscreen blackness in Cabiria as masquerade.” For somebody coming from the anthropological discipline, discourse on racial discrimination and biopolitics is part of the persisting stereotypes fueled by the colonialist past of anthropology. 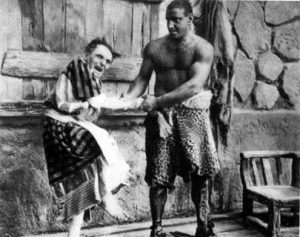 The picture provides the characterization, influenced by racial typology and biopolitics, of the slaves in the film “Cabiria.” 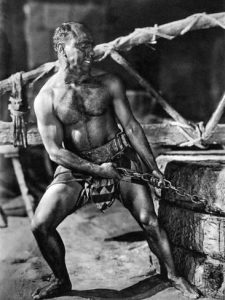 The characterization of Maciste as a slave as depicted in one of the scenes in the movie. 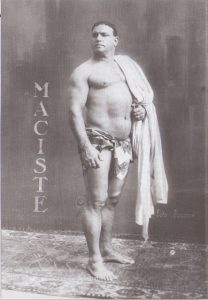 Another Picture of Maciste: the establishment of Maciste as an icon of nationalism and heroism. 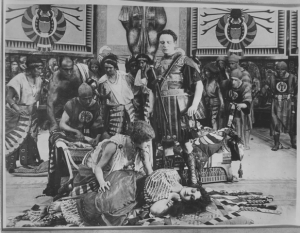 Overall, I felt that the discourse representing slaves in the case of the film Cabiria represents an interesting phenomenon of reformulation and rediscovery of its characterization. To put it simply, Reich said that “The racial discourses at work in that metamorphosis popularized current anthropological tenets of northern Italian and white superiority through the classic cinematic devices of heroic sacrifice, spectacular feats, and moral righteousness—all embodied in Maciste’s muscled, newly white physique.” More than the issue of this characterization as an issue of power over identities, I think it evokes a certain nationalistic consciousness thus requiring to stage Maciste’s blackness as an artistic display. Movies like Cabiria, doesn’t only provoke and enjoin the artistic eyes of the viewers but more importantly it made me, as a spectator, question some motives and themes it projects to overall social experience of film watching.