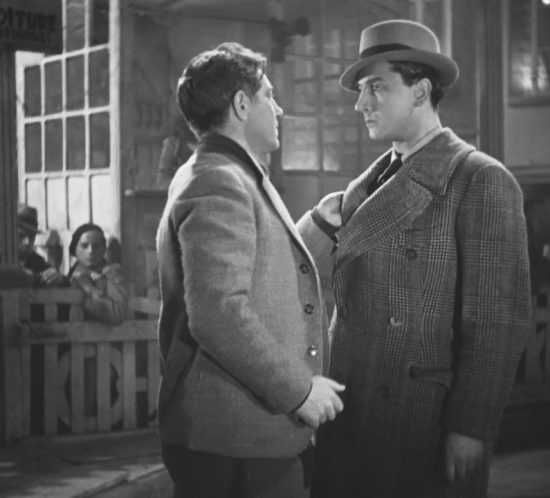 Set in the small city of Le Havre, the movie “Port of Shadows” tells us the story of misfortunate destinies of several strangers whose paths intertwine in the small port town in France. This tale spread throughout just a couple of days follows a soldiers who deserted and tries to escape to Venezuela from Le Havre, and his encounters with different people in the attempt to do so.

His plan is interrupted when he starts an affair with young Nelly, who is already involved in the disappearance of her former lover and is being the object of obsession of Lucien, a local criminal. Another important character is Zabel, her godfather, who is in love with Nelly and is ready to do anything to keep her away from other men. For that very reason he kills Marcel, Nelly’s former lover, and frames Jean. The movie ends up tragically for Zabel, who is murdered by Jean, and Jean who is murdered by Lucien in the very last scene of the movie. 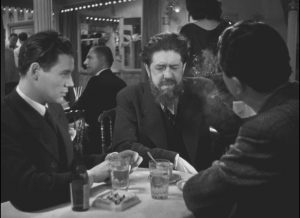 The movie is marked by a very pessimistic setting, besides the movie being set in a port that is often foggy (hence the title Le Quai des brumes, “Port of Fog” in literal translation), we encounter many characters with sinister traits who have a lot of power to achieve their goal, that most of the times means keeping Jean and Nelly separated. Fog plays an integral part in the movie, it happens very often that we just see silhouettes, rather than clear depiction of people, and uncertainty is generally present in the movie.

Dialogues and scenes with only Jean and Nelly in it are notably most “poetic ones”, they are usually marked by a very poetic exchange of ideas and affectious expressions between them (contrary to how people usually speak) and are followed by a close-up of their faces, that convey emotions of affection and lament. This can be interpreted as the characteristic of the Poetic Realism, the movement in French cinema of the 1930’s that the movie “Port of Shadows” belongs to. The movement is marked by the tendency to showcase characters in desperate circumstances (in the case of this movie, Jean who is a deserter trying to flee from France), who have a glimpse of hope and happiness (for example, romantic one, like in our example, Jean is sceptic in the beginning, but eventually falls in love with Nelly) that ends up abruptly and tragically, usually by death of the character (Jean getting shot by Lucien after reaffirming his relationship with Nelly).

Identity and manipulation of it is another a very important segment of the movie. Let us take a deeper look into the series of scenes where Jean tries to take over an identity of a painter in order to escape to Venezuela without being noticed. He gets the suit and equipment of the painter and gets rid of his army markings and clothing. He is soon to be caught in the screwball comedy like series of events (even the date of the release of movie coincides with the emergence of screwball comedies), with the renowned passenger of the ship trying to help him get on the ship by using his personal connections. What Jean did not count on is to acquire some knowledge on art and paintings, and he is forced to participate in a comedic exchange with his new friend, who is very interested in art and does some naïve art himself. When being asked about his insight on art, Jean starts expressing some random thoughts that he just came up with and that may sound profound, but in fact make no sense, and his partner in the conversation goes along, without noticing Jean’s charade. The manipulation of identities is once again used when Zabel tries to frame Jean by placing his military marking and clothing by the corpse of Marcel, thus making it seem like the real perpetrator is Jean.

The exchange of identities that leads to confusion and the risk of being exposed was a well-established tool in comedy that fits really well into the Jean’s storyline.  This series of events does not seem to fit to the mood of the movie as a whole, it is more light-hearted and comedic, while the rest of the movie is filled with jaded characters and seriousness of rugged life. 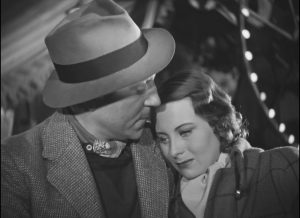 Another very interesting segment of the movie was the melodramatic premise. Buckland (1998, Film Studies. London: Hodder and Stoughton) lists the following as ‘primary attributes’ of melodrama: women-dominated narratives, the perspective of the victim, moral conflicts, omniscient narration, twists and reversals, chance events and encounters, secrets and dramatic knots which complicate the plot. We can see many of this elements in “Port of Shadows”. The narrative in this case is not very women-dominated, on contrary, there is an evident lack of female characters in the movie, but some other elements of melodrama are undoubtedly present, most notably twists and reversals (Marcel ending up murdered, Zabel trying to frame Jean, Jean killing Zabel and Lucien killing Jean). Also, there are many chance events and encounters, characters in this movie meet in the most unexpected, but strangely convenient times for advancing the plot, like Jean coming right on time to save Nelly from the arms of her godfather, Lucien meeting Jean and Nelly during the carnival ride by chance, an encounter that ends up in a fight and Jean’s death. The destinies of all characters in the movie are intertwined in a net of encounters. Also, the romance between Nelly and Jean complicates the plot when the love interferes with Jean’s plans, and actually get him killed in the end (if he had just stayed on the ship, he would have survived). 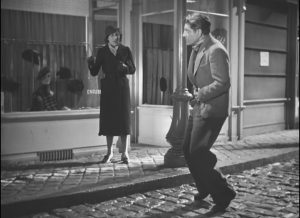 The movie represents a very interesting piece made just before the outbreak of the World War II, but it does not deal with troubled times and threatening political and social forces. The movie deals with inner demons and vices of a small town, without ever referring to a greater social structures that may affect or influence this (another feature of Poetic Realism). In all this, I found also interesting elements of melodrama (genre particularly dear to me), suspense and comedy, that may not sound as complementing to the general dark image of the movie, but somehow go along just fine, in the case of this movie. This excursions to different themes made this movie very intriguing and interesting to me, it is a movie that offers a variety of topics.

“Port of Shadows” may ends tragically and bear a certain harshness to it, but it does leave a very light hearted impression in the end. The movie has a very pessimistic premise, the main character tries to reach happiness, but fails in the last moment, just before running away with his love he gets shot. Regardless of this, the movie successfully escapes this pessimism by showing us that his love with Nelly was sincere and brought some contentment to his jaded personality. The movie comes full circle without the happy end, but that contributes to the overall charm of it.