Cabiria: an Itala Film Company production of 1914, directed by Giovanni Pastrone, that narrates the kidnapping, and liberation of Cabiria, a noble Roman girl in the third century BCE during the Punic Wars. The film was an altering highlight in early Italian cinema history, and beyond.

In that period, the historical film was the most profitable, and prestigious genre. Due to its pedagogical significance, cultural status, and spectacular value. This genre in fact gave Italian cinema commercial viability, and aesthetic legitimacy amongst bourgeois audiences. (Alovisio) Therefore it is not surprising that Cabiria was the most ambitious and expensive of historical epics. In fact, the film costed what would be equivalent today to the budget of ten films. (Reich)

Cabiria, a film produced with a spirit of Italian nationalism that was leaning on Roman victories, to justify and mobilize for colonialist aspirations, (Reich) was not without its own propaganda messages. Croessa was trying to convince Fulvius Axiella to help her save Cabiria from the hands of the priests who wanted to sacrifice her, she offered him a precious ring as a talisman of mercy, that would grant him the help of the gods, if he helped her, then the following intertitles said: “The Roman was tempted by this perilous undertaking.” The fact that the intertitles chose to emphasize Axiella’s “Romanness” in that context, and say that he was not tempted by the precious ring, and not even by the promise of the support of the gods, but rather by the fact that it was a Perilous/dangerous undertake, shows that he is trying to establish a kind of stereotype about Romans, and by analogy Italians, as being courageous and thirsty for adventure. 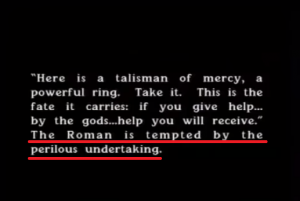 This picture shows the intertitles in discussion

In terms of acting, and especially when introducing a new setting, particularly if of significance, such as the gardens, or the temple, and so on, the actors pose a lot, as if they were to take a picture, their movement would be very slow and repetitive, where their acting appears to be suggestive and symbolic. Those shots appear as moving paintings, of some sorts. This probably comes from theater, and might appear unnatural, and even somewhat irritating even to a spectator today, but it should be due to the fact that contemporary acting has moved a long way from the type of acting we see in Cabiria, which makes one unaccustomed to, and inappreciative of it. 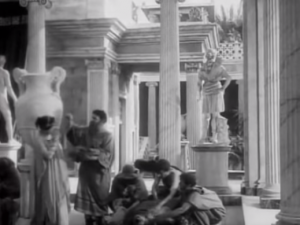 Here is an example of acting like a painting

It must be said that Cabiria’s settings, clothing, and objects were all very detailed, elaborate, and impressive. It is then not surprising that producing this film was very excessive economically and in even terms of the labour invested, to the point that it depressed the production company’s regular productions’ pace and standards. (Alvisio) According to Reich, Cabiria’s historical accuracy was praised. However, in terms of the motifs one sees on the settings, clothing, and decoration, one finds that they mostly come from a merge of Ancient Egyptian, and Babylonian arts, although the Carthage was Phoenician then. It is true that the Phoenicians did not leave as many artifacts as Ancient Egyptians, so there exists a gap, however it is not smart to get obvious Ancient Egyptian symbols and show them as Phoenician, as it disrespects the spectator’s intelligence.