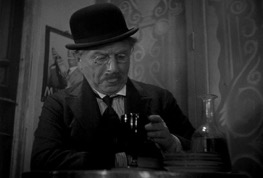 This passionate and troubled love story between a poor street singer and a naïve Romanian girl take place on the streets of Paris and inside its numerous caffées where young couples used to go for dancing and drinking. “Sous le toits de Paris” by René Clair, is an accurate depiction of the vibrant and melancholic atmosphere permeating Paris during the30’s.

Even if the movie is one of the first to use the new technology of the synchronized sound, the style and the plot can be inscribed into the way more ancient theatrical tradition of comedy.

The revival of the stage tradition inside the cinema had been adopted by French filmmaker for addressing the American cinema monopoly, that was aggressively eroding the share of French movies screened and produced.

One of the main strategies to set back American film industry monopoly that led French cinema to develop a very specific style, was the deployment of national and regional theatre traditions inside the cinema, translating and transposing folkloristic tales, stereotypes and regional cultural peculiarities inside their works (Andrew

The film is embodied of popular theatrical features that are fully deployed with the precise intent of amuse the audience, arouse laughs and fun among the public.

We can sum up these features in three main ways meant to entertain the public and give to the movie the clear cut of the comedy.

Here are proposed frames of the movie meant to visually explain the deployment of these stage features:

Construction of stereotyped characters, which actions corresponds faithfully to the common and popular representation of its figure. 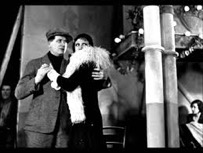 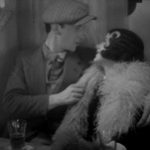 For example, Pola is depicted as the naïve girl, always in the arms of a different man (pic. 1-2). 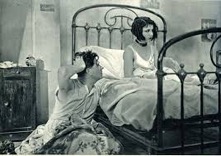 Her naivety became a source of drollery inside the movie, like after her scandalized reaction to Albert attempt to kiss her while she is his bed (pic. 3)

Creation of absurd situations, where the characters are pushed to clash against each other without following common reasoning or logic, for the mere purpose of intentionally entertain the public.

Here the sense of the lost – stolen money were both pretenders where claiming to have found Pola’s money. 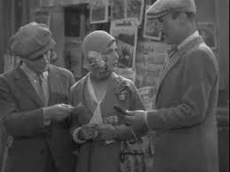 Manipulation of the different sound tracks that follow the development of the story in order to stress particular comic scenes or sequences, conveying the idea of musical comedy.

Here a frame of the final sequence when Albert and his friend suddenly start to fight for Pola with the gramophone playing a cavalry melody as soundtrack. For stressing even more stressing the hilarity of the scene an unware spectator looks to his glass of wine as he can’t believe to his own eyes.