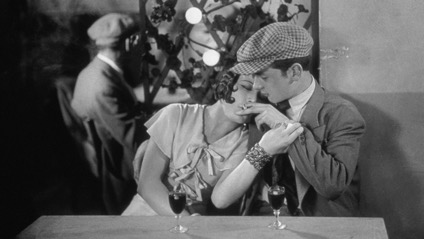 Sous les toits de Parisis a notable film in its relatively conservative and rather particular usage of sound, and in its romantic representation of Parisian life. Released in 1930, the film came two years after the introduction of sound into cinema. As such, it lies in an almost awkward position as an attempt to preserve the nature of silent cinema while incorporating some sound elements to enhance the power of the film, to appeal to a people familiar with theatrical aspects, and to demonstrate the possibilities available with the use of sound. 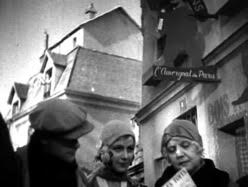 There are three main types of sounds utilized in the film: 1) spoken lines 2) object sounds 3) music.  Each form served specific purposes in strengthening the film’s power, despite the presence of music being the most prominent. It seemed that in maintaining the role of music in the film, Rene Clair was paying homage to the silent film industry.

Sound in this film was also used as a means of interrupting the audiovisual experience of the audience, bringing attention to a certain aspect. There were rather specific moments when the sound of an object would intercept and dominate the viewers’ auditory perceptions over music that was characteristic of silent cinema. 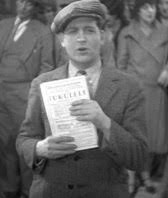 The sound of the clock striking midnight when Albert walks Pola in the streets, the ringing of the doorbell when Pola is locked out of her room, and the clock striking once more to demonstrate the time spent going back to Albert’s are all examples of the combination of an audiovisual experience that have been cleverly integrated into the narrative.

Other sound clips were used ironically as an overlay and play on the use of sound in cinema. The iconic fight scene in the movie was complimented by sounds of a passing train which was then interrupted by the sound of a bullet hitting a lamppost. This clever use of asynchronization proved the possibilities of sound in cinema. 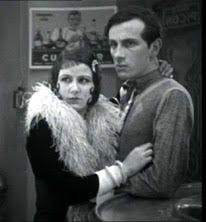 The playful manipulation of sound can also be seen in the scene of Louis and Albert’s fight for Pola. At the climax of the fight, the music on the record seemed to be stuck, constantly repeating the same part over and over again. However, it seemed as if the record was still playing normally on the phonograph. This served as a statement on sound cinema and while providing a lighthearted atmosphere in the midst of a heavy scene. 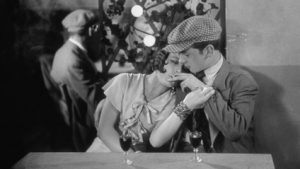 Despite the unsynchronized usage of sound and limited speaking lines in the film, the songs in Under the Roofs of Paris assisted in supporting the idea of a romanticized Paris It seems that starting from the rooftops, Sous les toits de Parisaimed to display a glimpse of a romanticized reality – a bit of Paris in its industrial sector, to show that despite the roofs being full of industrial chimneys and smoke, THIS was as Paris as any other part of the city. From the simplicity and comedic elements of the plot, to its windows and rooftops, Sous les toits de Parisis one of possibly many romantic representations of Paris at the time. The particular choices made in the extent and means through which sound was used shows a respect to its silent predecessors but also makes a statement on the incorporation of sound in future cinema.