Cabiriais an Italian film from the beginning of the 20thcentury, the year 1914, to be precise. Here I will discuss the importance of the movie for the cinema of the time and what is its significance today. We can start deliberating on the importance and greatness of the movie by stating the fact that the production of the movie influenced greatly other projects of its production company, Itala, and that it brought a great success to the beforementioned company. 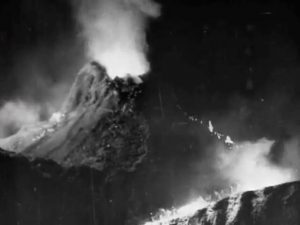 This more-than-two-hour long movie marked a milestone in the history of cinema by it’s usage of new technological features and at the same time conveying a complex story with a plot and fairly distinguished characters. One technological innovation that was very important for the future cinema is a tracking shot, made possible by placing the camera on a dolly and using it to follow characters as the move, zoom in, include the parts of the frame that are higher or lower, etc. There are other features that were original or innovative in Cabiria, one being the volcano eruption showed in the movie, the usage of internal and outside setting and lighting, portrayal of fire, battles that include a lot extras and some very elaborate set designs.

Besides all the technological advances I mentioned we cannot deny the complexity of the plot in Cabiria. The movie follows characters that have relationships (father-daughter, friends, fellow Romans, etc) and identities, they have goals and they have strategies to achieve this goal, etc. These are just few points in the plot that demonstrate this. Besides its temporal dimension (being historically marked), important thing to notice is also a spatial dimension, the movie takes place in different places and it successfully communicates this (using set design, costumes, intertitles). The project was without a doubt ambitious and represented an example to be followed.

Although I enjoy watching movies, this was a rare occasion for me to see a silent movie, and I will now reflect on the cinematic experience of watching Cabiria. Regardless of the existing plot and narrative tools used to convey a story, I found it pretty challenging to follow through the movie and grasp every detail. That made me think how sound in the movie and Hollywood/mainstream movie conventions made of us “lazy viewers”, making us put little to no effort while watching a movie. Mainstream modern cinema created the tools that help us watch a movie today without it being a great endeavor, the characters’ backstories are introduced clearly in the beginning of the movie, we are completely aware of the location, identities, relationships of the characters, their inner worlds and thoughts, etc.  While watching a silent movie, we have to pay closer attention to the facial expressions, body movements, posture of the protagonist in order to learn anything about their inner world, emotions or thoughts, and even then we may come to a wrong conclusion or understand something falsely. 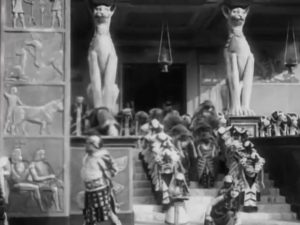 We have to pay closer attention to the status symbols, if we have, for example, 5 female characters in the frame, we have to see how are they dressed to conclude who is a servant and who is the ruler, if we are witnessing a fight, we have to recognize different costumes of opposing armies and use our history knowledge to understand who are Romans and who Carthaginians for example, etc. In modern day cinema, individual identities are usually clearly marked in a dialogue and not left to our visual interpretation.

Besides the technical part of the movie, we should also comment on the content of Cabiria, and what I found specifically interesting are characters and the relationships between them.

As I mentioned before, the character called Maciste plays an integral part in the success of the movie and that character continued on living even after Cabiria, he experienced many sequels afterwards and the actor starred as Maciste in all of them, just without black-face.         The character was presented as mulatto (without being strictly of white or black race) and the white actor was chosen for the role. The character was not completely black “signals an otherness that is not completely other, one who embodies both Romannes and Africanness, and thus a much more ambiguous figure” (Reich, The Metamorphosis of Maciste in Italian Silent Cinema, Film History, Vol 25, Issue 3: 38). This can be understood by putting the movie in the context of the Italian society of the time, on the one hand, Italy faced the conflict with a colonized territory, and on the other, the project of the national and identity-based unification of Italy was taking place. That means that the content or the narrative of a movie can be tied to a broader social and political context of a certain society or culture. Whether we talk about screwball comedies and their gender bending tendency or socialist cinema and the representation of the state-apparatus, we can always find a correlation of a certain time, political and social context and the narrative of a single movie. 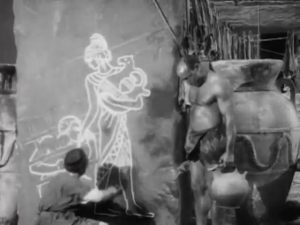 One very important thing in this movie I want to put an emphasis on is the role of the little Cabiria in it. Besides the name of the movie, her agency in it is highly limited and she is just the object that drives the plot where men have dominant roles (she is not even present during a big portion of the movie and in some of the most important and memorable scenes). Fulvius Axilla and Maciste dominate the movie in their presence, their activities and popularity, and that the role of Cabiria is very passive.

Characters in Cabiria can be seen and understood as standard for the time, in terms of race and gender representation, national identity and masculinity. Technological advancements are not the only thing that gives us an insight into the context of a certain movie, but also the plot and content of it.