Raina Roberts on Cabiria (1915) / The Temple of Moloch

The Temple of Moloch scene captures the increased narrative complexity and the improvements made in set design and spectacular effects which contributed to making Cabiria a stand-out film of its time.

For the narrative, this scene is of crucial importance because it is when the protagonists meet. This scene is a thrilling moment of tension and suspense, and a turning point in the plot. Furthermore, Maciste is established as a hero, as he is the one who courageously grabs Cabiria from priest.

In the scene that follows the establishing shot, initially, the fire is the only thing visible against a black background. Slowly, more light fills the screen, illuminating the priests standing behind the flame. The gradual addition of light adds to the sense of drama in the scene, and creates a sophisticated shot. This shot only lasts a few seconds between repeating intertitle cards, creating a moment of intensity.

What follows is one of the most compelling shots in the film. There’s a close-up on a hand, raised in the air, held in a fist, eerily illuminated by flames that flicker on either side of it. The fingers slowly move upwards as the fist unfurls. The fire creates alternating sections of light and shadow against the palm of the hand, evoking a spooky and dramatic atmosphere. This shot is the only close-up in this scene, and one of very few in the entire film. The use of this striking shot and lighting serves to emphasize the power of the priest, and create a sense of fear. Additionally, the light in this shot on its own underscores the ominous atmosphere.

The next shot is a long shot, from slightly above, where the viewer can see the inside of the temple and the backs of the huddled worshippers. The camera is not centered on the sacrificial apparatus, and the viewer has the sense of being in the room itself, peeking in from the back, similarly to the protagonists, yet not quite among them. The camera is never immersed in the crowd, and the viewer never feels as though they are part of the masses, but witnessing from close by. 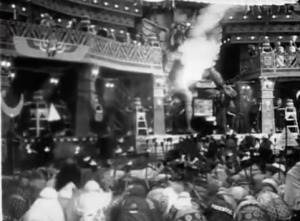 The use of long and extra long shots in this scene is imperative in creating a sense of the scale. This scene in the Temple of Moloch is impressive because of hulking statues and the crowds. The long shots allow the viewers to witness the scope of what is happening. This scene demonstrates the skill and artistry that went into the set and artistic design for this film.

Though there were many other visually powerful scenes in the film, the Temple of Moloch stuck with me the most. It captured how the set design, visual effects, and narrative can work together in order to create a cohesive experience for the audience, where they are informed not only by what they see and hear, but also by what they feel, triggered by a combination of camera angles and artistic design.