In this very first post in the blog, the target of the research is an Italian silent film called Cabiriawhich was made in 1914. In the beginning, a concise introduction to the film, its conspicuous process of the production, and technical analysis will be given. 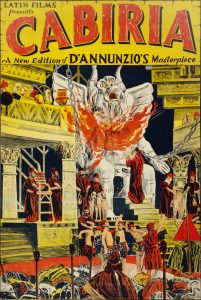 First of all, I would like to give a very brief summary of Cabiria. Cabiria: a daughter of Batto and her nurse Coroessa are kidnapped by some pirates during the Last Days of Pompeii. She is sold as a slave in Carthage to be sacrificed to god Moloch. A Roman spy Fulvius and his slave Maciste rescue her and she ends up in the queen Sophonisba’s care. In the next ten years, after many wars and Carthage falls to the Romans and Cabiria returns home.

There were also several other factors which feature Cabiriain the course of producing the film. One of them was the director: Pastron’s play. He had many responsibilities in different aspects of the production. He was not only in charge of directing the film but also the set, costume design, shooting, and editing. The introduction of the new technics that Pastron demonstrated later made Cabiriato transform a significant cultural landscape.

Speaking of characters, there was one character who especially caught my attention for the technical use of camera movement to shoot him. There was an interesting scene in which a man appears on the screen for the first time, who later helps Fuvius and Maciste to hide when they are running away from pirates to protect Cabiria. Most of the scenes were taken by a fixed camera and from objective perspectives. In this scene, he was shot as if he was talking to spectators: looking directly into the fixed camera. He was distinguished from other characters by the effective technic of shooting-angle. As one of the spectators, it was easy to see that the man had an important role in the movie when I first did not know about his role at the very first time he was revealed.

To provide an analysis on, I will introduce two kinds of system in attractions. Firstly, “system of monstrative attractions” was dominated early in the film’s history until around 1908. In this system, filmic monstration and attraction were always primary instead of film narration. Secondly, “system of narrative integration” kept its domination until 1914 which is the year Cabiriawas shot. Within the system of narrative integration, close-ups, high-angle shots, and tracking shots had more functioning than within the system of monstractive attractions.

These systems were illustrated in Cabiria. One of the outstanding techniques that was used in the film was close-up of camera’s movement. Some of the scenes in the film were distinguished by the influential function of close-up. There were also a few black screens without any comments nor narration that were placed between scenes. These effects were not applicated frequently. They were exercised in order to emphasize some scenes or characters. Considering the era when the project ofCabiriastarted, it is easy to contemplate that the system of narrative integration as stylistic choices of camera operators was illustrated in the film since this system extended its domination up to 1914. You are able to see the more functional use of camera operators.

With the outstanding way of producing the film and the introduction of the new techniques,Cabiriawas a successful project that became a significant cultural landscape.